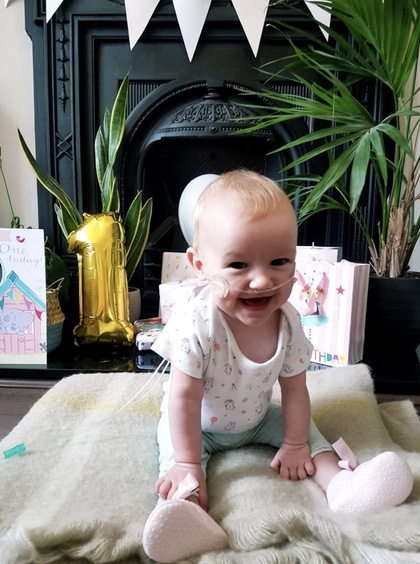 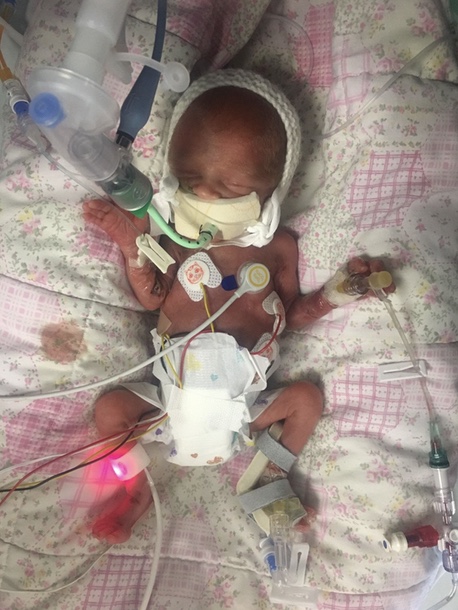 Riley entered the world via planned C-section after we received a diagnosis of early onset IUGR, being born in Medway Maritime Hospital and weighing a mighty 1lb 7oz. Following a rocky start which saw her health deteriorate, after 10 days we were transferred to Kings College Hospital to be closer to the surgical teams should they be needed.

Due to her very low birth weight, her underdeveloped lungs were ultimately to pose the biggest challenge during our time in Kings. After spending 3 months in intensive care and having been fully ventilated for 58 days, she was successfully extubated, graduating to CPAP and eventually Optiflow.

Along the way she experienced what we soon learnt were typical preemie challenges; PDA, NEC, poor weight gain, apnoea/bradycardia, jaundice, reflux, sepsis, drug withdrawal and multiple infections. But it was the constant monitoring of her o2 sats and ventilation settings which occupied most of our time and mental energy.

Life in NICU:
As the weeks went by we soon adjusted to life in NICU, learning to read the Obs charts (which are very confusing in the beginning) and getting involved in Riley’s cares wherever we could. We soon came to recognise when Riley needed a blood transfusion (“is she looking a bit pale today?”) and it was amazing how procedures which were so scary to us in the beginning gradually became the norm. Multiple cannulas, long lines, administering NG feeds and daily drugs etc., along with trying to change a dirty nappy through the doors of an incubator, which felt like a crystal maze challenge in the beginning!

During her hospital stay, we quickly realised how important it was to look after each other so we could stay strong for Riley. We learnt to lean on the support of both the amazing Kings team and other parents that we met along the way, who are the only people who truly understand what it’s like to walk this path.

Riley’s nurses continually went above and beyond when caring for her, whether rocking her to sleep, playing her music or doing baby exercises, so although it was always difficult to leave her overnight, we knew she was in the best possible hands. And while it was bittersweet to spend her first Christmas in hospital, the team made it a really special day. We were amazed that Riley managed to write us a card (I think she might have had some help!) and she even had a visit from Santa.

Where we are now:
Riley was finally discharged home on 10th March 2019 after 195 long days in three different hospitals and since then she has gone from strength to strength. Celebrating her first birthday back in August was very emotional and reminded us of just how far she’s come. We are so proud of our little warrior, she amazes us every day.

She is still tiny for her age but is steadily growing at her own pace and while she is currently on oxygen support at home we’re hoping that this won’t be for too much longer. She has mastered crawling (we’re amazed at how fast she can go!) and now loves standing up (albeit a tad wobbly). She is currently in size 2 nappies, has finally graduated to 3-6 month clothing and loves porridge, music, chewing on everything and playing with her hide and squeak eggs.

Our journey over the last year has been an incredible rollercoaster and we will be eternally grateful to the dedicated teams at Medway, Kings College and Lewisham hospitals for everything they did for our girl.

We were also lucky enough to be introduced to the amazing Ickle Pickles charity along the way, benefiting directly from the donation of Kangaroo chairs to Kings while we were there which made a real difference to us personally in those early, critical weeks. So THANK YOU, for the incredible work that you do!