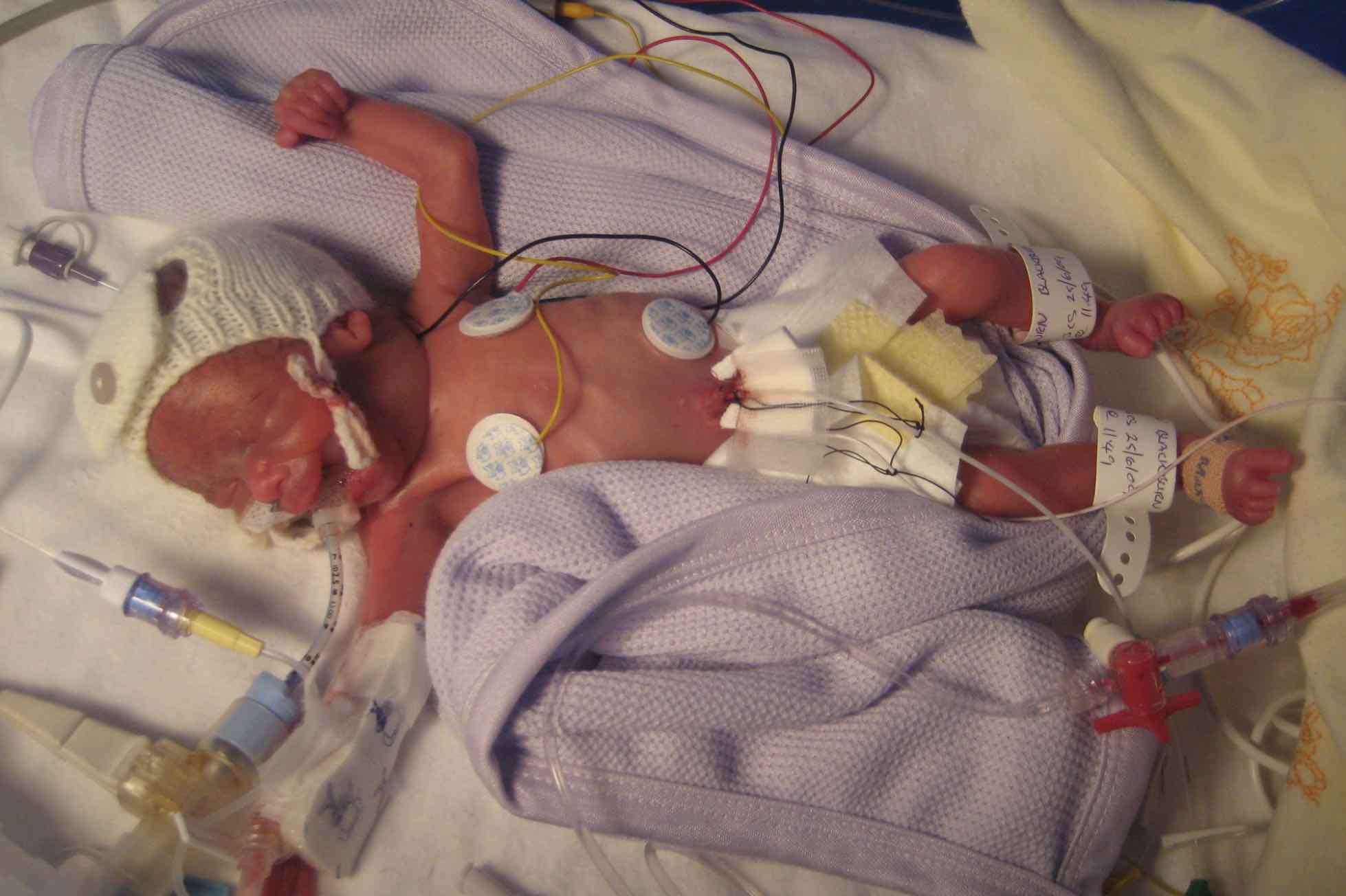 After a very sicky pregnancy a routine appointment at the midwife ended up with a visit to the hospital to have a 'quick check up'
It was discovered that I had preeclampsia at 26 weeks.
The words actually used were, 'Do you know what is happening?' I said 'No'
The Doctor then said 'You have severe preeclampsia, we hope you make it 28 weeks. Do you have any questions?'
Just like that, my world turned upside down.

As the hours passed, I kept questioning how on earth our tiny baby could ever survive being born so early.
At 26 weeks and 5 days our little boy entered the world via emergency C-Section weighing 1lb 10oz. My husband Chris was in theatre with me. That was until some complications arose in theatre and I was put under a general anaesthetic.

I came round to see my tiny baby being transferred to the NICU. I asked my husband what we had and he told me a boy. After that I don't remember too much.

I finally got to see Owen after what felt like a lifetime but I myself was extremely poorly so I didn't get to see him for long.

Owen was born at St Mary's hospital in Portsmouth. His early arrival meant he would be one of the babies being transferred to the new Neonatal Unit at QA in Cosham. Turns out he was one of the first babies to be transferred there. (It is our claim to fame, we ended up on the local news)

We were told Owen had a heart condition that would later require surgery. At that stage he just needed to feed and grow.
The team looking after Owen were AMAZING. There are no other words for it. We visited at all hours of the day and night. I didn't want to spend a second away from him. I felt like I had failed keeping him safe inside me but I could and would do anything and everything I could now that he was here.
The team became family. That's really how it felt. You see the same faces, day in day out. You put your trust in these people, that were once strangers to care for your child when you can't be there.
Walking out of the hospital without my baby is one of the hardest things to do as parent.

Owen was doing well and we moved from Intensive Care to Special Care (Totally missing HDU)
Sadly Owen became poorly. It was thought it was an infection but it was decided he should move to Southampton Ocean Ward so they could run further tests on his heart.
Whilst he was there it was discovered after a routine eye test that he would need surgery to save his sight.
The tests on his heart showed that nothing had really changed from his birth so he was transferred to the Princess Anne Neonatal Unit in Southampton.

He had surgery on his eyes and we were told it was a success.
I was frantic with worry during the surgery. What if it didn't work? What if something went wrong? What if, what if, what if?

It was decided that Owen would stay in Southampton to monitor his recovery and he would be transferred back to QA closer to home ready for discharge after a week at Southampton.

About 4 days after surgery, Owen seemed to be struggling. I voiced my concerns but we were reassured it might be because we were changing his milk. Throughout the weekend he seemed extremely unsettled. His bowel movements had changed and became offensive smelling. Again we were reassured.
We decided to head home at quiet time and as he was being transferred to our local hospital the following day and home later that week we knew we needed to get things ready.

The following morning at 7.30am, we received a call to say that Owen had deteriorated and we needed to get there...NOW.
We got there to see Owen was sedated and ventilated.
He was rushed into theatre and shortly after we were told that Owen had a blood clot which had starved his lower organs of blood and oxygen and that he wasn't going to make it.

Family were called and Owen was christened. He passed away in my arms later that day.

My husband Chris and I had always planned on raising some funds for the units that had cared for Owen, this was even before Owen passed.
We organised a few fundraisers and just a year later I was volunteering for Ickle Pickles. A year after that I was offered a full time position with the charity.

I adore my job. It allows me to give something back to say thank you for giving Chris and I 12 wonderful weeks with our Owen. Thank you just really was not enough.

Since Owen's passing, we had more heartache of an 8 year wait and 3 rounds of IVF but we welcomed out beautiful little Luna into the world.
She too was a NICU baby. Again preeclampsia reared its ugly head.
We managed to get to 34 weeks and 2 days into pregnancy after early signs of issues at 26 weeks (It felt like history repeating itself)
Our 5lb 14oz at birth is now our gorgeous 18 month old rainbow baby who has given us so much to smile about.