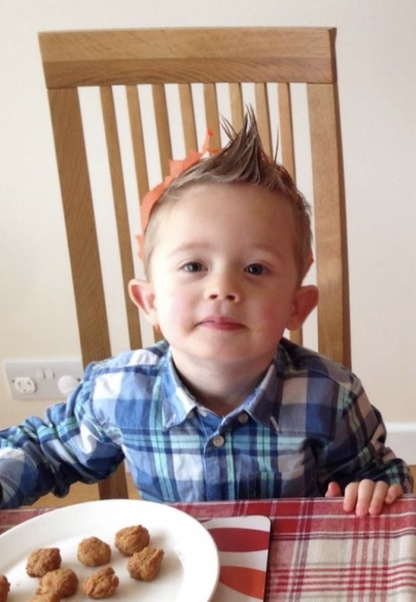 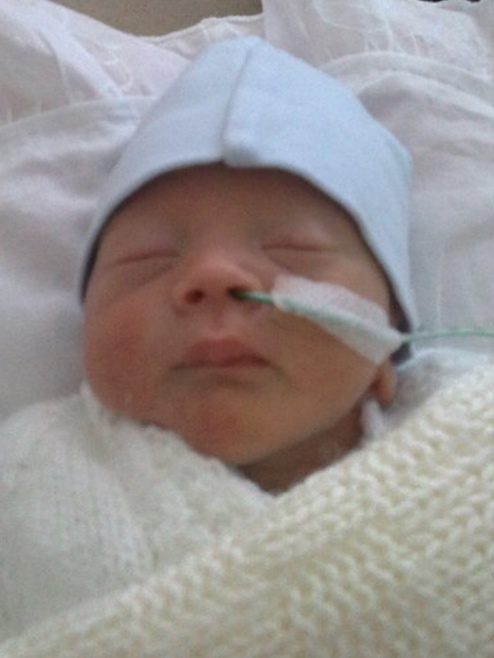 After a shaky start to my pregnancy, one of the scans showed there was an amniotic band. We tried hard not to worry and were monitored closely through the early days.
Then, just as I was gaining confidence, at exactly 23 weeks along my waters broke. I was admitted to hospital and told to wait for labour. But labour never came. After a week in hospital I was allowed home and the monitoring continued.

I managed to get to exactly 30 weeks and suddenly became very unwell. We went into hospital and Jim was delivered at 8pm by emergency caesarean section. When he was pulled from me he made no attempt to breathe or cry as his little lungs weren’t able to open due to the lack of water. He was whisked away from me and worked on throughout the night. At 3am my baby boy was finally stable enough for me to meet him. He was in an incubator, surrounded by tubes and machines, was on a ventilator and looked so very, very tiny. His neck, face and eyes were swollen and his feet were black with bruises.

The next day I was allowed to hold him. I was petrified – so frightened of breaking him or pulling out an essential wire or tube. Machines all around me beeped, whirled and alarmed and I had no idea of what they meant or how significant each noise was. Everything frightened me.
I was recovering on the maternity ward and was promised that if he were to take a turn for the worst they would come and tell me immediately. I used to dread the sound of every footstep walking towards my bed, and cock my ear each time the ward telephone rang. I thought my heart would jump out of my chest at times.
Jim came off the ventilator and moved onto CPap and this was a brilliant first step. We’d never really known for sure if he would be able to breathe on his own and this was a great sign.

After a week I was well enough to come home and the ritual of sleeping at home, managing my just-turned-three year old daughter and getting to see Jim began. The nights were the hardest time to leave him. It’s such an alien thing to do, to force yourself to walk away from your baby and leave him in the care of strangers - never knowing if each kiss will be the last one. One night I got home, got ready for bed and made my normal phone call to the unit before I slept and there was an uncomfortable pause on the phone. Jim’s heart had stopped and they we unsure as to why. I vividly remember sitting on the bathroom floor sobbing as I waited for the consultant to ring me back with the details. Jim would often stop breathing, we’d almost become blasé to that, but the heart was a new one for us.
Jim was always hard to feed and was tube fed for much longer than his fellow in-mates.
He had various tests to check for things like retinal damage, brain bleeds, hearing loss.
When you are thrown into NICU life you are warned that it’s an emotional rollercoaster and boy, are they right.

Finally, after seven weeks of the most amazing care, skill and support from the whole team at the QA we were allowed to take our little bundle of trouble home with us.
We had champagne, cake and blue balloons. That night I sat up and held him until four in the morning. I’d never been able to hold him for so long and I never wanted to put him down again. I cried tears of joy and tears of fear. No one really knows what the future holds for each baby born this early and nothing about them can be taken for granted. Nothing is the same as it is with a term child.

Outcomes vary enormously - we have been so lucky.

Jim has had a lot of trouble with his breathing over the years and has an eating disorder, but appears to have mostly got away with his tricky start.
He is a fun loving, intelligent, charming boy who brings sunshine and laugher to everyone he meets. The weedy, sickly little kid has grown into a strapping, muscular nine-year old who is taller than his peers.

I will never stop being thankful for my miracle boy.